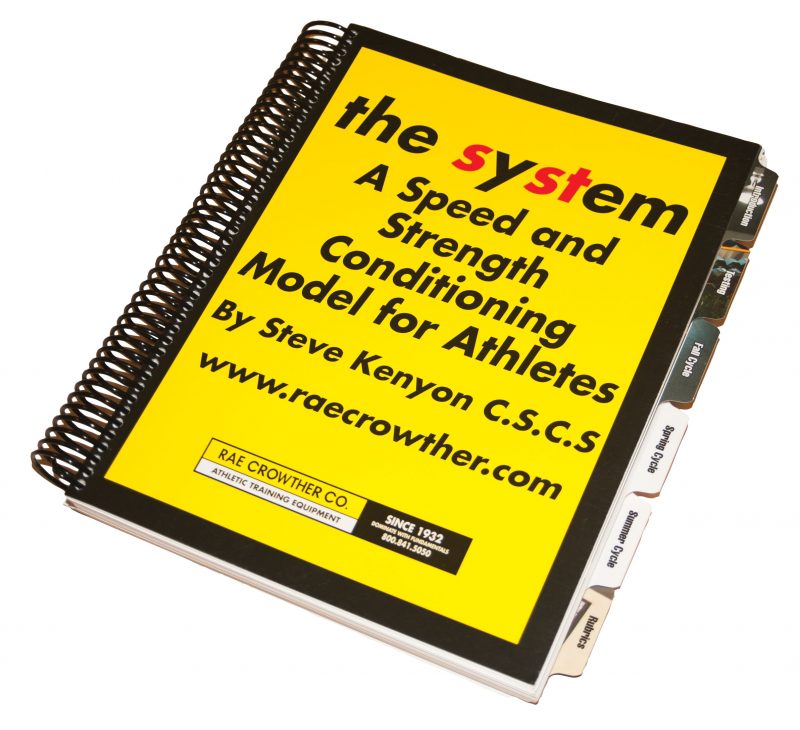 THE SYSTEM BOOK – THE 100 BEST EXERCISES

It’s here! The new 2017-2018 Speed and Strength Conditioning manual. A comprehensive strength and conditioning manual for high school athletes. The system is a stepwise, sequential, progressive program for high school physical education and athletics designed to optimize athletic performance. The System trains movements and not muscles. The System trains through the season, not just to the season. The System gives the coach “a lot of tools in the coaching toolbox.” The essence of the system is variation by design. Variation, intensity, technique. Although the units of training are sequenced following sound physiological principles, the exercise selection varies from day to day. The manual contains the following information:

Rubrics – Used by the coach, the rubric is the basis of evaluation from a performance and an academic standpoint. The rubrics for the “Big 100” exercises form the foundation of the system.

Metrics – How much, how many, how fast, how far: The system incorporates multiple measurements to create accountability and responsibility in students and athletes in their daily training.

Exercises And Video – There are ten exercises per unit of training. Known collectively as the “The Big 100,” think of these exercises as if they were the menu in a restaurant: A finite number of exercises that would be regularly if not randomly “selected” by the “customer.” Virtually all of the exercises are accompanied by video that shows the exercises in real time and slow motion, and multiple angles. These videos are accessed on line with a pass code that is included with the purchase of The System.

Microcycle – There are five sessions per week in one Microcycle. Monday, Wednesday and Friday sessions are primarily weightroom based. Tuesday and Thursday sessions are typically designed for the indoor gym, field or track.

Sessions – There are ninety sessions in a Mesocycle. The first five sessions of the fall and spring mesocycle include the Physical Performance Profile (PPP). The summer mesocycle does not include a PPP. It is a compilation of the “best of the best” 40 sessions.

We have been using elements of the SST system at Cedar Grove for three years. We are a small school and a lot of our athletes play multiple sports. In the last two years, we have won two state track championships and been to the Quarterfinals and Semifinals in basketball. This year, we won the first state championship in football in school history. I can’t say enough great things about the SST principles we’ve used to improve athletic performance and to keep our athletes relatively injury-free. Huge thanks to Coach Kenyon! Go Saints!